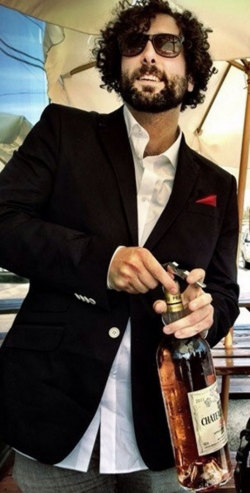 What he does: Winemaker at Enfield Wine Co.

Where he learned his craft: Like many of the best winemakers, John has no formal wine education, but rather he learned from the bottom up, working under talented folks. In 2004, John was living in Oakland and building guitars (!) when he met winemaker David Mahaffey. David is a small grower you’ve not likely heard of who has been quietly making wine in Napa since the early ’80s. In John’s words: “He’s the one who really taught me the basics of winemaking—he literally does everything himself. But perhaps more importantly, he taught me how to have fun doing it. And he introduced me to Heron Lake vineyard, which just blew my mind. It was such a staggeringly beautiful place, but yet it was tucked away in this weird AVA and no one had ever heard of it.” If you’ve had the chance to taste John’s Heron Lake wines, you know just how lucky he was to fall in with David. They are magic.

After time at David’s winery, he worked a harvest under the great Ted Lemon at Littorai before flying out to Argentina to work for Bodegas Melipal, a small, family-owned winery in Mendoza. When he started poking around for job opportunities, the name that kept popping up was Ehren Jordan, of Failla. He got that job while still in Argentina and spent the next six years with Ehren, honing his chops. It worked. He began making Enfield wines while still at Failla and is now all Enfield, all the time.

Why I like him: These are, hands down, my favorite new wines I’ve tasted in a good long while. With the very recent emergence of the “New California” style, it’s easier and easier to find balanced, brighter, lower-alcohol wines, with less influence of oak. Wines from houses like Dashe, Arnot-Roberts, Wind Gap, Corison, and Littorai have become sort of the standard-bearers of this style, and all of John’s wines belong on the same table as these greats. He makes edgy, pure, and serious wines, using lots of whole-cluster fermentation and not a lot of oak. Tasting his 2013 Sonoma Coast cabernet sauvignon from the barrel was a powerful reminder of just how great domestic cabernet could be. He also makes some of the best syrah, chardonnay, and tempranillo in the state. (Granted, the bar is super-low on tempranillo.)

A few details: All John’s vineyards are farmed sustainably, and he is even making a move toward Fukuoka farming (the ironically laborious, “do nothing” method from Japan) in his chardonnay vineyard. He owns no vineyards (who does, these days?) but farms his parcels mostly by himself. The wines are fermented spontaneously (no commercial yeasts added) and tend to see a maximum of about 20 percent new oak, depending on the vintage and how many new barrels he bought that year. All his barrels are committed to specific grapes. For the entire life of a barrel designated for syrah, for example, the barrel will contain only syrah. Pretty cool.

Where to buy: Upon release, you will undoubtedly see these wines on the best lists in the city and at all the hipper retailers. At the moment, the best way to buy the wines is directly from John at Enfield Wine Co.

Collin-Peter Casey has worked in the wine business for 16 years. The last 10 years, he has worked as a sommelier. He has worked for many of the Bay Area’s best restaurants and currently resides at Namu Gaji in the Mission. This column is CPC’s opportunity to say nice things about winemakers, sommeliers, wine directors, and importers who get the admiration of the (jaded) professional wine community.

Full disclosure: Collin helps sell the Valley View import/wholesale book part time. In any instance that the subjects of this column are clients of Collin’s, he will specify it.

Categorized in: In The Press